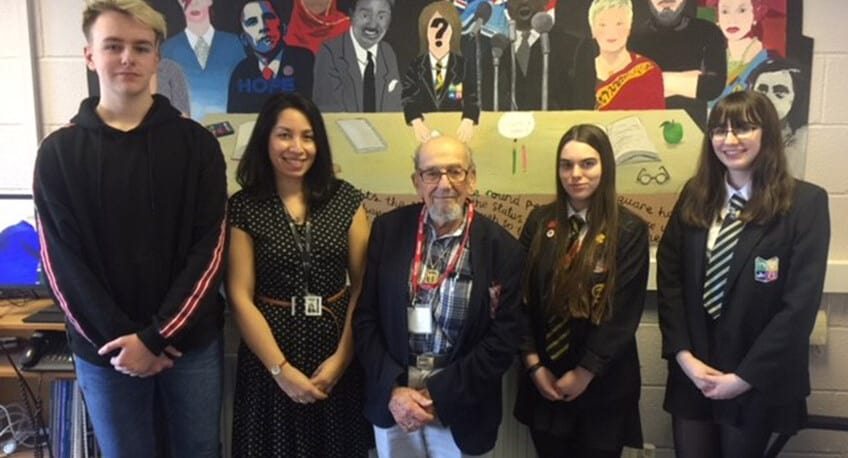 On Thursday 15th March, students at Abbeyfield School were fortunate enough to hear the testimony of Holocaust survivor Harry Bibring. Arranged by teacher Lidia Farquharson through the Holocaust Education Trust (HET), Harry’s visit was part of a Genocide unit studied in Humanities.

Harry was born on 26th December 1925 in Vienna, Austria. After the Anschluss in 1938, Harry was forced to leave his Gymnasium (German grammar school) and was transferred to a basic secondary school that was designated to accommodate only Jewish children.

On 10th November 1938, Harry’s father’s menswear business was looted and destroyed during Kristallnacht. He was arrested and Harry’s family were forced to leave their flat and live in a house together with 50 other Jewish women and children. The family were allowed to return to their flat following Harry’s father’s release, but by this point they knew they had to leave Vienna. The intention was for the family to flee to Shanghai but Harry’s father was unable to procure the visas and passage tickets, probably because by the time he was able to raise the necessary funds, they were no longer available.

Fearing for the safety of their children, Harry’s parents decided that he and his sister should leave for Britain on the Kindertransport. The plan was for them to be sponsored by a family friend and for their parents to join them as soon as they could. That never happened. In November 1940, Harry’s father died of a heart attack. His mother was deported by the Nazis to the death camp at Sobibór in German-occupied Poland in 1942.

In his talk to students, Harry said that it was important to share his story with young people to ensure that: “Students do not get into any type of prejudice which leads to hate; this is the dream.”

Keeran Hayward, a 14 year old student at Abbeyfield, said: “It was really engrossing. Harry had an accent I had never heard before and he made you feel as if you were there in the past with him. It was pretty upsetting because you could imagine yourself going through it.”