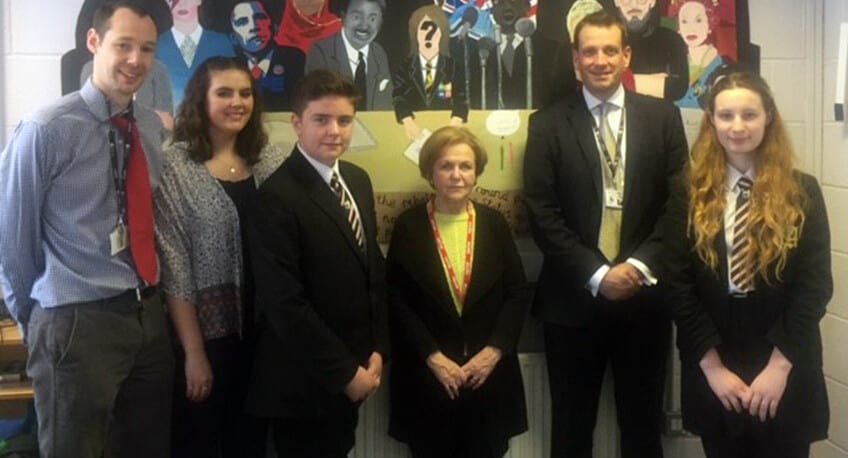 PUPILS at Abbeyfield School in Chippenham had a sobering experience when they welcomed a survivor of a Nazi concentration camp from the Second World War.

Mala Tribich MBE talked about her experiences of the camps as part of Holocaust Survivors’ Week.

She lived in Poland until the Nazi invasion in 1939, and lost her sister, mother and father in the mass genocide that killed millions of Jews.

“It always felt so distant but having Marla here brings it home,” said Rhys Fisher, a Year 9 pupil. “She’s been through so much.”

Tamsin Smy, also a Year 9 pupil, said: “She talked a lot and didn’t speak as though she was upset, it was something that happened and something that we can get over.”

Year 9 pupils have been studying the Holocaust and looking at more recent genocides, such as that in Rwanda.

Matt Bryant, the head of humanities at Abbeyfield said: “Year 9 students in humanities study genocide, in which they do a case study on the Holocaust.

“Listening to a survivor helps students to empathise and reflect, not only on those who died as a result of persecution, but also those who have survived and had to rebuild their lives.

“The focus of the day was around the theme of how life goes on and Mala’s story helped students reflect on society today and how we treat immigrants and asylum seekers fleeing persecution.”

Two sixth form students, Izzy Humber and Lucy James, have recently returned from a visit to Auschwitz, along with other students from Wiltshire.

Izzy said: “Until you get there you don’t know how you’re going to feel. You start to take it all in but it’s not until you go home that you reflect on it.

“You were stood where so many people were kept and it just hits you how sad it was but visiting it is something that I would definitely recommend.”